From BEASTX Wiki
Jump to: navigation, search
This page is a translated version of the page Manuals:MB Plus:Receiver setup menu B and the translation is 100% complete.

For each specific type of single-line receiver selected at menu point A there is an appropriate type of receiver channel allocation saved in MICROBEAST PLUS. Please refer to the tables below. Use the column that represents your receiver type and the Status-LED color that was set at menu point A and check if your radio transmits the channels in the defined order respectively each stick function on the radio is transmitted using the specified channel number on the left. To know the channel assignment of your transmitter you can check the user manual of the transmitter or look at the servo monitor of the transmitter if it has this feature. If in doubt ask the manufacturer of your transmitter. 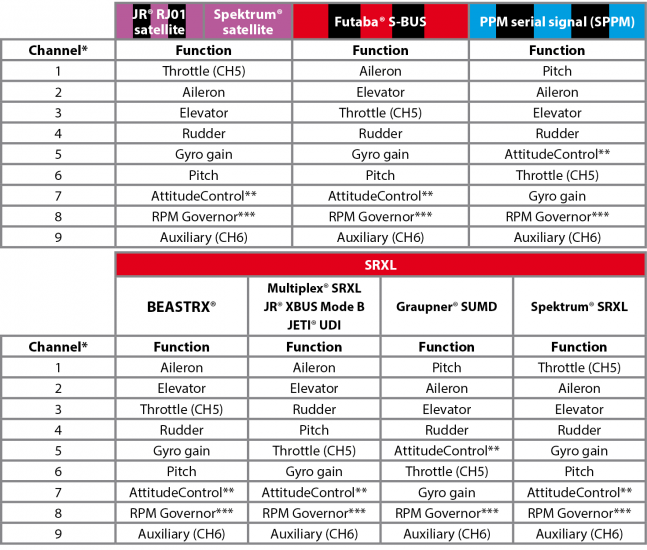 To load the preset channel assignment wait until the Status-LED lights blue and then hold down the button for several seconds. The yellow Menu-LED will immediately jump to Receiver menu point N.

In case the ordering differs from the given tables, you have to manually assign the channel order step by step. How this works is described below.

If you need a customized channel order, please first prepare your transmitter as described here. Additionally make sure that each control function of your transmitter activates one and only one channel, for example by using the servo monitor of your transmitter. This can be tricky especially for throttle/collective pitch functions which are usually coupled by a mixer in the transmitter. In this case set the throttle channel quiet, for example by using the throttle hold switch or providing a flat throttle curve, so that the thrust stick actually controls only the channel for the collective pitch. For the later, keep the possibility to control also the throttle channel like by flipping a switch or similar.

In the following menu points you can assign the different functions by simply actuating the appropriate channel function on your transmitter.

When you move the control stick/adjust the channel with the transmitter a blue flash of the Status-LED indicates that a channel has been detected. It does not matter how far or in what direction you move the stick or in what position the stick/switch was. Note the channel value itself is not important, but the change of this value is. It is therefore important that only the requested function is activated and not by accident several simultaneously. Otherwise MICROBEAST PLUS may not recognize the allocated channel correctly. If you have moved the wrong stick/switch, you can reactivate the correct function again. The MICROBEAST PLUS remembers only the last function that was operated and confirms it with blue flashing of the Status-LED.

Press the button after learning each function to save the assignment and to go to the next function. Once a channel was assigned, it is no longer available and is ignored by MICROBEAST PLUS for the remaining process. Thus, after learning of the collective pitch function (menu point B) you can enable the throttle function (remove throttle hold and switch to a linear or V shape curve) and teach the throttle channel by re-operating the thrust stick at menu point G. Now the collective pitch channel is no longer considered as this channel has already been assigned previously and MICROBEAST PLUS will detect and use the throttle channel as actuator for throttle function!

The first 6 functions must be assigned as they are necessary for the basic flight control and the button remains locked until you operate a new control function. The other options are optional to assign and can be skipped. If special features like AttitudeControl or RPM Governor are not installed on your device, the specific menu points for assignment will not be accessible at all.

If the Status-LED stays red at one of the menu points this means that there is no valid remote control signal available. A channel assignment in this case is impossible! Check if the receiver is properly bound to the transmitter and that a receiver/transmission protocol of the correct type is selected at Receiver menu point A. Switch off the power and restart the receiver type setup procedure from the beginning.

Please note that the RPM Governor as well as the AttitudeControl will not work as long as these functions have not been enabled at the specific menu points (Setup menu point N and Parameter menu point L). Here in receiver menu only the transmitter channel assignment for controlling these functions is defined.

After the last menu point for channel assignment by pressing the button the Menu-LED jumps directly to Receiver menu point N for throttle failsafe setting.