When using electric motors the rpm sensor signal usually consists of the (electric) field speed. In order to obtain the actual engine speed the field speed must be divided by half the number of motor poles. Using a 2-pole motor thus the measured speed corresponds to the motor speed. With a 10-pole motor on the other hand the field speed is five times higher than the actual speed. Also for nitro/gas engines the measured speed of the sensor may be higher than the actual speed. For example when a magnetic sensor is installed and more than one magnets are used for measuring the rotational speed, the rpm output will be multiplied by the number of magnets. So when two sensor magnets are used the rpm signal from the sensor will be twice the engine revolutions. So in order the rotor speed matches the rotor speed you set with the transmitter you must specifiy the factor by how much the incoming rpm signal must be divided to get the actual motor rpm.

The motor poles of an electric motor can be easily determined by counting the number of magnets built into the motor housing. Each magnet corresponds to one magnetic pole. Note that on some motors pairs of magnets are used rather than one single large magnet. These pairs together form just one magnetic pole! If in doubt refer to the datasheet of the motor or ask the manufacturer or your local dealer.

To determine the number of magnets that are used for a magnetic rpm sensor in a nitro helicopter, you can use the Sensor Test mode of GOVERNOR MENU (Menu point A). Each time a magnet passes the sensor the Status-LED will light up in blue color there, i.e. when you turn the clutch bell by hand. So you simply count how often the Status-LED lights up during one rotation. Then this is the divider you have to setup.

At GOVERNOR MENU point E the division factor is represented by the color of the Status-LED. Use the rudder stick to switch between options. 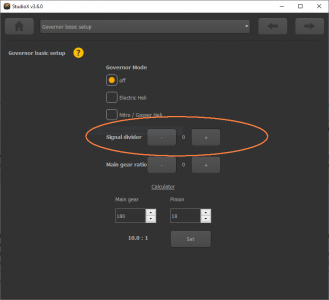