GOVERNOR MENU point B is used to set the lowest throttle position. This is needed as the system must know the motor starting point for the automatic spool up of the rotor when enabling the governor from standing still.

With a nitro/gasser model bring the throttle stick to idle position or a slightly increased idle position (not „motor off“!) so MICROBEAST PLUS can determine the effective throttle range in the next step. In case you've not assigned an auxiliary channel to control the Governor when doing the setup in RECEIVER MENU, this position additionaly will be used as idle position when performing autorotation maneuvers. So you should set the throttle as high as necessary here that the motor will maintain a stable run and doesn‘t quit in autorotation.

Watch Out! Output [CH5] can be directly controlled by the throttle stick.

When performing the setup with StudioX, you will see the actual internal throttle value in the app. Usually this will be something around +-1000 when the throttle is at lowest position. Push the SET button in order to store this value as lowest throttle value for the headspeed governor. 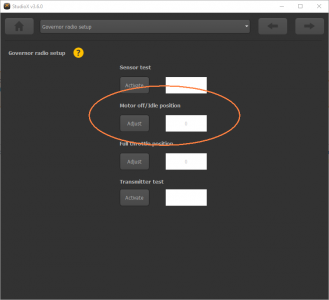