At SETUP MENU point J we trim the servo center positions so that each servo horn forms an exact 90 degrees angle with the adjustment linkage. This is necessary as usually you will not be able to attach the servo horns in exact center position to the servo. After all servos have been trimmed do not proceed to the next menu point yet. After trimming adjust the linkage rods according to your helicopter's manual, so the rotorhead system is set up neutral and allows to have equal movements in all directions. For this the swashplate should be at the midpoint and perpendicular to the main shaft and the rotor blades should have 0 degrees of pitch. Always work this out from bottom (servos) to top (blade grips).

In case your helicopter has a non-DFC rotor head with adjustable swashplate driver also don‘t forget to level and phase the swashplate driver in the correct way. At 0 degrees of pitch the swash driver arms must be horizontal and the linkage balls of the blade grips must be perpendicular to the spindle shaft.

Initially the trimming is 0 for all servos. In this case the Status LED will be off when entering Setup Menu Point J. At first, attach the servo horns to the servos in this position. So you will make sure to get roughly equal throws to both directions. Mount the servo horns so that they form a 90 degrees angle to the linkage rod as close as possible. Then in the next step you can fine trim every single servo‘s center position, as usually mounting the servo horns at exact 90 degrees will not work out perfectly, depending on the servo gear trains and the servo horns.

By tapping the rudder stick you can select one servo after another. Every color of the Status-LED is corresponding to a specific servo channel that is indicating its selection by a short up and down move. Use the aileron stick to change the servo trimming/adjust the center position. You can switch back and forth between the servos with rudder as often as you need.

If necessary, you can also trim the swashplate position at once. For this push and hold the button for at least 2 seconds when at Setup Menu Point J, then release. The servos will move in a circular manner to indicate the trimming mode has changed. Now you can trim the swashplate into each direction by tapping or holding aileron or elevator. The collective pitch can be trimmed up and down with the rudder stick.

In order to get back to the single servo trim, again push and hold the button for 2 seconds! The elevator servo [CH1] will make a movement two show the mode was switched.

To reset the trimming and set all positions back to zero, push and hold the button for 10 seconds or more. When the yellow menu LEDs start to cycle in a loop, release the button.

When the servo trim screen appears, for your reference the servos will briefly move up and down once one after another in the given order CH1 to CH3 (CH7) so you can identify them easily. Trim each servo using the + and - buttons so that the servo horn forms an exact 90 degrees angle with the linkage rod. Then make the mechanical adjustment for the linkages as described above if necessary. 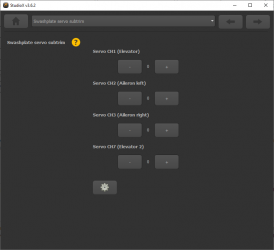 If necessary, you can also trim the swashplate position at once. For this click the Gear button to switch to the advanced swash trimming screen. Here you can trim pitch, roll and collective. 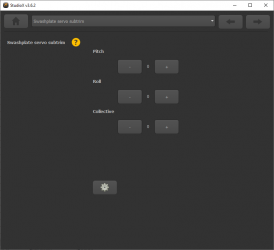